Another author interview today! This week, I talked with JR Creaden, a YA/SF author.

MG: Who was your favorite author as a child? Do they influence your storytelling now? END_OF_DOCUMENT_TOKEN_TO_BE_REPLACED

I recently had the privilege of sitting down with author Devin Harnois, who’s snarky characters and relevant (and often humorous) plots are something I can only hope to achieve some day.

MG: Thanks for sitting down with me today, Devin! We’ll start with a fun one, how does that sound?

MG: Where is your favorite place to write?

DH: My office… which is also my bedroom. I have it set up to be comfortable and functional, plus, I have fun things to look at.

MG: Cool! I do like to ask this one, too. Is being a writer a gift or a curse?

DH: Gift, definitely. I mean, it can be hard sometimes, but why would you view something so wonderful as a curse?

MG: So very true. Speaking of gifts and curses, what do you think about social media for marketing? What works best for you?

DH: Umm, I’m really terrible about marketing. I have no idea how to do it. I’m on Twitter all the time becaise I like it. It’s a place to hang out and hear about things from all over the world. I’m not there to be a sell bot.

MG: I love Twitter, too. What is the hardest part of writing for you?

DH: Discipline. LOL. If I sit and make myself focus, it’s usually not too hard.

MG: Oh, discipline is definitely a hard one for me, too! So one last question. What are you currently working on, and what is it about?

DH: It’s a romance called Shadowmancer, about Marius, a man cursed with dark magic who is actually a precious cinnamon roll. He meets a guy who… well, I like to describe Ayodele as a Griffindor who was raised by a Slythering and left to create Hufflepuff.

MG: Oh, my! That sounds interesting!

DH: Thanks! It’s got themes of “weak” people finding strength together, and belonging, and fighting for each other.

MG: Fun! We need more “team” books; it seems like it’s always about that one person saving the world (or whatever it is they’re trying to save.) Well, I think that was everything. Thanks again for sitting down with me tonight!

DH: No problem! Thanks for having me! 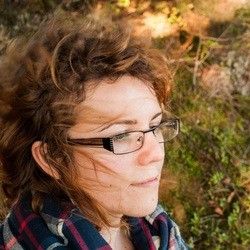