Our bodies close,
no breath between,
her skin so fair and smooth,
Lustrous contours revealed.

Beneath my hands,
Soft mounds
Of fevered, silken flesh.
“Come inside,” she appeals.

“If you desire,” I reply,
Caressing every curve.
She spreads her thighs,
Her entrance still concealed.

Eager now
I shift between,
Parting sodden lips
With dagger made of steel.

I slip inside,
The lady sheathes me whole.
Onward we love,
With vigor and with zeal.

She holds on tight,
And to her delight,
I come inside
My darling, Camille.

It’s been a while since I’ve posted for Wordplay Wednesday, perhaps because I’ve had… nothing to say in poetic verse, or I’ve been too busy to care much about the weekly post. Perhaps because I hadn’t found words that needed to be said. I must reflect for a moment, so please bear with me.

Until last week, I was in a state of denial – that won’t happen here. It can’t. We’re “Minnesota Nice” here. We’re good folk. We. Don’t. Do. That. And yet… I still knew it was possible. Even likely. It’s just a matter of time. I know I’m not alone in thinking that way. I’m simply not that unique.

As just a little background, I grew up in Roseville, which borders Falcon Heights on the East and North. Falcon Heights is part of the Roseville school district. I know the corner where it happened. My grandparents lived in Falcon Heights. I learned how to ice skate at the elementary school’s ice rink, back in the day when they still had one, and I learned how to cross country ski there. My dad and uncles went to that school. I still know people who live there. I make my yearly pilgrimage to people-watch at the MN State Fair, literally “just down the road”. (Note: the North entrance to the Fairgrounds is basically across the street.) I know that corner. This is my home.

In light of recent events, my brain pretty much turned off. It’s a self-defense mechanism for me. It takes some time to just be angry or sad or hurt while it sifts through the wreckage of whatever happened. Sometimes, that’s not enough.

As a teenager, I often turned to writing to clear the thoughts out of my head. The process helped me organize my thoughts and emotions, to really dig into what I was thinking, what I was feeling, to express myself clearly.

But sometimes, even writing is not enough. Sometimes, nothing can mend a broken heart or even clarify thoughts or emotions. Not even writing about it. I’m still confused and frustrated and broken-hearted over the state of our country, even more so, now that it has hit so close to home.

Here I am just staring at an empty page.
My heart is filled with tears of sorrow and of rage.
I am but only one, still searching for the words,
One voice lost among the thundering herds.
I wonder if there’s anything at all that can be done
To bring us all together, uniting us as one.
As the canyon grows, wider in between,
The solution also grows, harder to be seen.
Just simple little things – peace, love, and harmony –
All lost among the chaos and uncertainty.
Words escape my clever tongue,
Their stories left unsung.
We’ve fallen down a rabbit hole,
We no longer have control.
Divided – we are falling
Our leaders are still stalling.
What are you waiting for?
Another one? How many more?
I am but one white voice –
How many more can make some noise?
Why can’t you see that idleness
Perpetuates the violence?
What is it going to take
To erase all of this hate?
Why is this still a thing?
What can one voice bring?
There’s ringing in my ears,
I can’t stop all these tears,
What do I tell my little ones
About racism and guns?
How do I explain to them,
When I’m still feeling numb,
That a man will not grow old
Because he did what he was told?
Life is precious – not a game –
But what can one voice say
To get their full attention,
When will they
Shut up
And listen?

Thanks to my good friend, Ash Litton, who challenged me to rewrite the lyrics to Here We Go a-Wassailing. 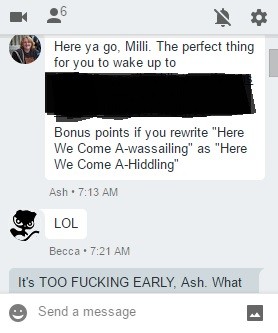 Anyone who knows me (at all) knows I’ve a “little” crush on that lanky British boy, Tom Hiddleston. In fact, I’ve dedicated myself, this entire month of April, to annoy the living piss out of my husband by changing my general ringtone on my phone to Hiddles singing Happy Birthday. Why? ‘Cause my bithday’s on the 17th, that’s why. Now that I’ve derailed my own post, I will spend hours on Pinterest, pinning anything that has Hiddles on it to my “Tom” board. I call that “Hiddling” (Hiddles hunting, in case you’re wondering, though I must admit, I rarely have to look far, and I’m not on for hours specifically searching for him – he kind of just appears. It’s like an Easter egg hunt – only easier.) For the record, it was too early in the morning, and I couldn’t say no. Plus it’s a prompt/challenge, to which I cannot say “no” anyway…

So… without further adieu, the challenge I received at 7am Tuesday morning, still not braining enough to say no… (Apparently, there are bonus points if it conjures the Hiddles himself on my front steps…)

Here we come a-Hiddling, among the Hiddles pics.
Here we come a-Hiddling, watching all his flicks.
Love and joy come to you, (also gifs of Hiddles dance).
Odin bless you and send you a box of Hiddles smiles.
Odin bless you and send you a Hiddles autograph.
He memorized Miami, quotes sonnets on a whim,
And wears a full-length cloak made of flowing leather skin;
While women kneel before him, as more than mewling quim.
What’s a girl to do if he takes a pseudonym?
Gods bless the man who’s spirit is a caffeinated squirrel;
And the screaming hoards of the army he commands.