This week brings a tease from Misty Carlisle’s debut short story, Hunting the Hunter which I had the privilege of beta reading. If you want awkward nerdy types in a sweet romance, this is the story for you! 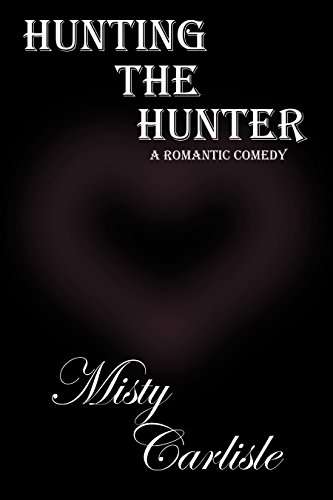 Diana is a traveling presenter spending no more than a week in any town. She presents science to high school kids to get them interested in STEM (Science, Technology, Engineering and Math) careers. She’s all but given up hope on anything longer than a one-night stand. Hunter is a Chemistry professor at Anteros University, where he is returning from a one year leave to recover from a lab accident. He’s not even looking to add love to his life. They’re perfect for each other, and only have one week to figure it out.

“The bar’s empty tonight.” Val pulled the mug back across the bar. “I’ll bring your mug, so go on over and say ‘hi’.”
“Yeah, right.”
“Go on.” Then Val and the mug of chocolaty ambrosia were gone. The hints of peppermint hung in the air, pulling him to follow.
Val was right. He had to come out of his shell at some point. A quiet night at the Bowman’s was as good a time as any. What’s the worst that could happen? I could be rejected by a woman I’ll never meet again. Or it’ll go great, and I’ll still never meet her again. Nothing to lose. Hunter sighed and pushed those thoughts aside. “Hot damn,” he muttered as he slid off the stool. There were nine stools around the curved bar, and he sat in the second from the end on the left. Directly across from him would be the last stool on the right, so five between here and there. His cane would be too cumbersome, so he let his hand drag along the padded leather surface of each stool as he passed.
Three… Four… Five.* “Excuse me, do you mind if I sit here?” He might have been talking to empty air.
“Please.” Her rich, inviting alto wrapped him in warmth. “You must be a local.”
“How’d you guess?” He adjusted his orientation.
“You didn’t come in through the hotel lobby.” Her laugh rang lightly. “And you know your way around.”
His cheeks flared with heat.
“I’m sorry.” She added quickly, “I didn’t mean to embarrass you.”
“It’s alright,” he lied. “I’m still getting used to it.” Actually, he hated the way most people were so direct about his disability, always trying to do things for him because they couldn’t imagine how he could ever manage without sight. “You must be new to town.” He decided to play her game. “You chose this side of the bar and called me a local.”
She chuckled. “I deserve that.”
They sat there for a moment without saying anything. The scent of her mulled cider mingled with his peppermint hot chocolate when Val thunked his mug in front of him again. He found it by the heat; it’d cooled enough to taste it for real.
“I’m impressed by your observational skills,” she said after a time. “I mean that, really.”
What an odd thing to say. “Um… thank you?”
“No really, I mean it. I’m not sure how you navigated this room, but you did. I saw your cane when you came in, but you didn’t use it on the way over here. You must really know this place. Did you count the chairs? Did Val tell you how many? No, he wouldn’t do that. You figured it out for yourself, and I’m babbling, sorry. But I really am impressed that you found me, and your mug all while blindfolded. I’m shutting up now.”
Hunter’s internal chuckles leaked out when he said, “I am blind.”
“You weren’t always. I’d guess fairly recently – maybe two years?”
It was his turn to be impressed. “Just one.” Her breath caught. He imagined her blushing and staring into her mug. He hated this part, when his accident was the only thing they could think of and yet they didn’t know what else to say. It was so awkward.
“Are you a scientist?”
“What?”
“It’s just…” She scraped her mug around on the counter. “I don’t know… I mean, you just have precision of habit that… The way you arranged the condiments on the other end of the bar, I’d be willing to bet you used atomic numbers to decide whether the salt or pepper should be to the left. It’s the way you counted your steps – your stride is very consistent…” She pushed her mug around in three circles. She might have sighed.
“You… you just seem like a scientist to me.”
“I teach Intro to Chemistry and General Chemistry at Anteros U.” He put his hand over hers. She was cool despite the hot drink she’d just let go of. “How about you? What do you do with your skills?”
“My skills?”
“You’re pretty observant, too.” He shifted his whole body to face her. Now, if he could just get that cheesy grin off his lips. “The way you described me coming in and navigating the bar— very precise and not a lot of supposition. I’d kill to have students who were half as aware as you are.”

Misty Carlisle turned to writing when she couldn’t find the kind of worlds she wanted to live in. She loves the freedom to twist plots and tropes and play with an audience’s expectations. Every story starts with a trope and turns it upside down. Tell her she can’t do something, and she takes it as a challenge. The world of Romance is in for a surprise.