This week’s tease comes to us from Devin Harnois, who you might remember, I interviewed a couple months ago. Undaunted is his latest release, and available on Amazon now! 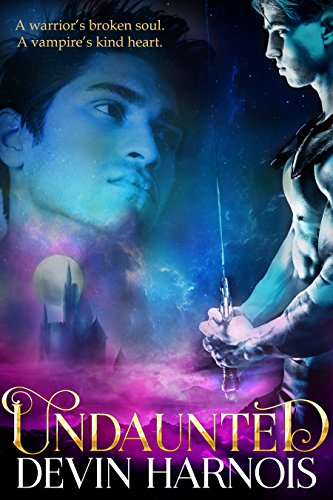 Kelas Vartorvi escaped from one vampire only to find himself bound to another. Roshan saved his life and honor demands Kelas stays by his side until he repays the debt.
Roshan takes his broody new werewolf bodyguard in stride. Slowly, his relentless good nature begins to break down Kelas’s walls.
And their tentative friendship becomes something more.
An unexpected visitor from Roshan’s past throws them into a political plot and gives Kelas a chance for revenge. But are the gods blessing Kelas, or asking for a sacrifice?

Roshan woke to find Kelas missing. He first thought he might have gone to the privy, but the door to it and the door to the bathroom were both open. He sat up with a flutter of nervousness in his belly. Maybe Kelas hadn’t been comfortable sleeping with him. Kelas had seemed withdrawn after they had sex.

Did I do something wrong?

Maybe he’d just gone back to his own room. Roshan wanted to check on him, to make sure he was okay. If Kelas didn’t want to talk, then so be it. But he needed to know. He slid out of bed and pulled on his pants.

After crossing the hall, he pressed an ear to Kelas’s door. Silence. If he wasn’t in his room, then where was he? Roshan knocked softly anyway, but of course there was no answer.

What if he was gone—really gone? What if Roshan had done something or said something to drive him away? He tried to guess how long it had been since he’d fallen asleep. It couldn’t be much more than an hour or two. It was possible to catch up to Kelas no matter which way he’d gone.

Roshan took a deep breath, drawing in Kelas’s scent. He tried to ignore the smell that still clung to his skin and focused on what was in the hall. Kelas hadn’t gone back to his room, he’d gone… Roshan turned to follow the trail past a few rooms. Not toward the stairs but toward the other end where a set of glass doors led out to the balcony.

The doors stood open, the early-morning breeze fluttering the sheer curtains on either side. Roshan hurried through the doorway, but no one was there.

No, the scent was strong, coming from nearby. Roshan scanned all the way around, then leaned back against the rail and looked up. Kelas sat on the brown-tiled roof, head resting on his knees.

Kelas met his gaze briefly before looking away.

Roshan hopped lightly onto the polished wooden railing, then turned and jumped onto the roof. “I thought you might’ve left.”

“And you came after me, just as you said you would.” Kelas stared out at the city. The sun was just rising, painting the sky in pink and orange. The light reflected off the ribbon of water that gave the inn its name.

Sunrise meant bedtime now, but Roshan remembered a time when it meant the start of a new day. Hope and fresh possibilities. He held on to that idea. Kelas was still here, so whatever was wrong hadn’t driven him off completely.

Roshan sat beside him, drawing his knees up. Taking a deep breath, he dared to ask, “Did I do something wrong? Do you regret what we did?”

Kelas’s head snapped around. “No! You did nothing wrong. You’ve been nothing but kind to me, even when I didn’t deserve it.” His head dropped. “I still don’t. I don’t deserve any of this.”

Roshan slid closer and took one of Kelas’s hands. He would say anything, do anything, to make Kelas feel better. “Yes you do.”

“I want to believe that.” Kelas squeezed his hand. “Some part of me does.” He let go of Roshan’s hand and leaned away from him. “When we were together, you looked at me… touched me… like I mattered.”

“Of course you matter.” It broke Roshan’s heart to think Kelas would ever doubt that.

But clearly he did. Kelas dropped his gaze and moved his head in such a slight motion that Roshan almost missed he was shaking it.

Roshan laid a hand on his cheek. “Gods, what did they do to you?” He couldn’t imagine what would hurt a man as strong as Kelas so deeply. He didn’t want to.

Kelas took a shaky breath. “I thought my mind was the one thing they couldn’t touch, the only thing I had left.” He looked out toward the dawn, moisture filling his eyes. “But I was wrong. I tried… I tried so hard, but they… broke me.” A sob escaped him as tears spilled out of his eyes.

Roshan put his arms around him and drew Kelas against his shoulder. “You’re not broken.” Roshan ached for his friend. He’d seen Kelas’s fear and grief, but now he was seeing the deep pain Kelas had even hidden from himself. Roshan wanted to kill every person who had ever harmed his friend.

Kelas wept against him, leaving wet trails on his skin. “They did. They made me a Hound… Told me I was an animal…” He shook his head. “I know they’re wrong. I know. But I feel…” He choked on a sob.

Roshan pushed Kelas away so he could look in his eyes. He cupped his face, thumb wiping away a tear. “Then I’ll tell you how wonderful you are. How brave and stubborn and fucking amazing you are. A hundred times a day until it chases out every horrible thing they said to you.”

Kelas managed a small, shaky laugh, then leaned in to kiss Roshan. A hard, desperate kiss, as if he was trying swallow Roshan’s words. Then he pressed his forehead against Roshan’s. “I don’t know if I can heal from this wound.”

Roshan slid a firm, gentle hand around the back of his neck. “I have faith in you.” He didn’t doubt for a second that Kelas would overcome this. It might take time, but he’d win in the end.

Kelas wrapped his arms around him and pressed a kiss close to his ear. “Thank you.”

For a while they stayed there, holding each other while the sun climbed and the colors of dawn faded. Finally Roshan drew back and took Kelas’s hand. “Come back to bed.”

“Let me hold you. Please.” This was way too serious, and Roshan wanted to lighten the mood. “I promise I won’t hog the covers.”

Ah, there was a little smile. “Okay.”